On October 8th,  I was in  San Francisco to see the Canadian Snow Birds and the Blue Angels perform in honor of Fleet Week. Both performances were breath-taking. It is hard to imagine how much training the pilots go through.  We watched them fly in formation, disappearing from the sky, then suddenly coming up behind us.

The finale for the Blue Angels had them flying under the bridge, smoke trails tracing their seemingly impossible flight paths.

We were on a ship anchored in the bay, surrounded by other boats ranging from elegant yachts, other converted paddle- wheelers like the one we were on, small sailing boats and even kayaks.

I would have liked to show you the magnificent pictures I took of the planes as they flew by; but once again, I discovered that taking pictures of supersonic planes on a crowded ship deck with an iPhone results in pictures of your fellow passengers heads, your finger over the lens, or the clear sky.

It was a beautiful day, even in San Francisco, with brilliant blue skies and a slight wind.

I did get some pictures (see below), but you will have to imagine the planes.

A view of the San Francisco skyline from the ship deck. 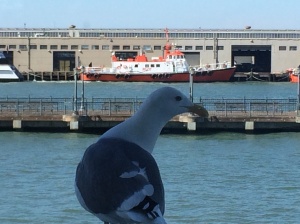 One of our fellow travelers watching the planes. 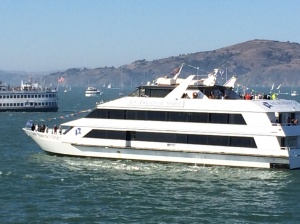